My 5 cents on New Apple TV

I'm probably going crazy around here. I have been watching all kinds of speculation about Apple TV. Lots of people are disappointed because Apple hasn't announced any iOS Apps for it.

However, I see this a little bit different. Apple has announced AirPlay. For me, this is clearly the path that Apple will follow to deliver Apps to Apple TV. AirPlay has been announced as a way for you to stream your video content from your iOS device (iPhone, iPad or iPod touch) to your Apple TV.

From the broadcasting perspective, it makes no difference at all streaming your video/photos or just your own Screen. Adding Apps directly to Apple TV would require storage, what Apple clearly stated to be an issue for consumers. However, broadcasting the iPad screen to Apple TV would allow one to have a fancy remote (iPad) connected directly to your TV for controlling nearly anything. Apps would be available from the iOS devices, as usual, with the option for playing on the TV, via Apple TV, when needed.

This would fix the storage problem and would make the Apple products even better connected. Makes sense?

BTW, check our Apps at www.babs2go.com.br .

-Luciano
Posted by Luciano G. Fagundes at 7:48 PM No comments:

It has been a while now since WWDC 2010. I was there live this time; it was one of the greatest experiences of my life. I highly recommend that you attend next year if you can. Well, one thing that I have learned over the last couple years working on the Apple world is that everyone is entitled to have opinions, make predictions and start rumours about the future of the platform. As usual, Apple will never have an official statement up to whatever is said gets launched during the "one more thing" speech of Steve Jobs and whatever I'm writing here, I'm not endorsed in anyway by Apple.

Anyway, after attending about five sessions per day, what really caught my attention is the push from Apple to the multi-tasking world. Of course that five in each five Apple blogs have already told you everything that you ever wanted (or not) to know about iOS 4 multitasking, but I think that I have a different approach here. I want to highlight, not the multitasking on the user side ( what everyone is talking about ) but I want to mention the multitasking on the App development side.

Nope, I'm not going all technical here. In general, Apple has introduced Grand Central Dispatch (GCD) for developer on iOS 4. This is a framework that enable developers to build Apps that have internal components running in parallel. Users will probably never even notice this (except that Apps would tend to be more responsive...); however, multithreaded code for developers could make a huge difference. But, we still have a single A4 processor in iPhone 4 and also in iPad; what leads me to my "futurology" session.

If you think that running code in parallel on a single processor makes no sense, well, you are right. In general, Apps will have the capacity of running in parallel but they will still compete for a single processor. The main advantage for iOS 4 on the current devices is that Apps using GCD will no longer hung or freeze on their hands. Developers will be able to put there blocking codes (load an image from the internet, open a dropbox session, etc) into a separated process what will not ever freeze your UI again. However, this will not add any performance improvements.

Going beyond iOS4, things start looking much better. My prediction after WWDC is that at some time soon we will see multi-core A4(x) processors. This would make a lot of sense. Apple traditionally introduces new technologies in phases. Assuming that developers will start using GDC to improvement their user experience now, Apple will have by the end of this year tons of Apps that will be enabled for true multitasking. Apple would be ready to "change everything again". The next generation of multi-core iPads would not even need to wait up to new Apps get developed. Virtually, every single App that uses GCD would be ready for multitasking at day one. Apple will be able to have the fastest tablet in place in no time.

Regarding time-frames, it would be just a matter of wrapping-up the offers. Apple could take the approach of launching an iPad/iPhone 4 "G" in 2011 ( I assume that by then the 4G cellular networks will be more common in US), this would keep the sales going up by itself because people would really feel the difference of the network speed; may make no sense introducing a multi-core A4 at that moment because it would add to the cost of the 4G components and it could also be a waste of a silver bullet.

As such, I'd see a multi-core iPad/iPhone being introduced to the market on WWDC 2012. Cost would have gone down, 4G will be available to most people, Apple will be ready to launch iPhone 4Gs ( s for speed, does this sound familiar? ).
Well, Let's keep following the next steps and see what predictions come true. The only certain here is that whatever path Apple takes, iOS4 is just the top of the iceberg.

- Luciano
Posted by Luciano G. Fagundes at 12:54 AM No comments:

Mutation is about to be completed!!

PACMAN Reloaded is on final stages to become Squid Trap !

Apple has approved the latest update yesterday. Ever since, I have already changed all the marketing material and as the servers get updated, the migration is being completed.

I can see totally updated material in the United States, it means that most of the countries where people see the English descriptions should be fine. I still see some issue with the Brazilian translation that shall be fixed over the next few hours.

I do apologize for any inconvenience that this migration may have caused but I hope to compensate that with you when I release new versions of Squid Trap during this year.

More than 400 people have already upgraded their software. Thanks !

-Luciano
Posted by Luciano G. Fagundes at 7:42 AM No comments:

We have received a notice from Apple telling us that NAMCO has complained about PACMAN Reloaded.

As usual, I have decided to do a little research about the topic by myself and based on my findings, the only option that I could find was completely remove PACMAN Reloaded from the Market.

As such, we have completly changed the look and feel of the App. The good thing about it is that we could use more updated graphics and sounds. In my opinion, it has become an even better software.

Over the next couple days (assuming that Apple approves the new App version and NAMCO has no more requests), our "Squid Trap" should be made available at the App Store.

In case you want to keep the PACMAN look and feel, make sure you do not update your software. If you want to keep receiving the latest and greatest updates, upgrade to the new  "Squid Trap".

Here are a few screenshots of the upcoming version: 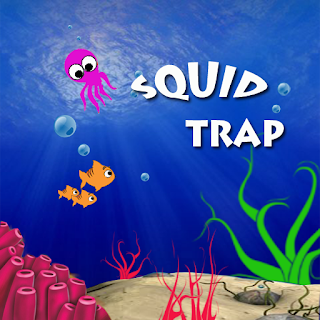 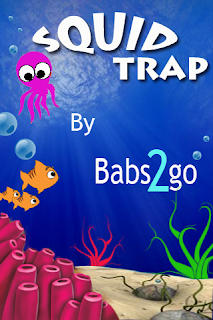 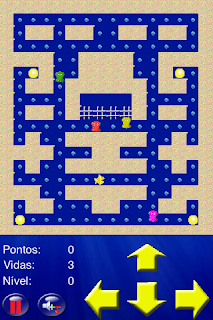 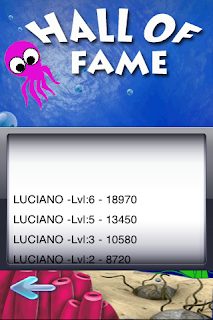 -Luciano
Posted by Luciano G. Fagundes at 9:00 PM No comments:

We in Babs2Go really appreciate all the feedback we are getting from the PACMAN community. As of now, we are particular interested on hearing your opinions about the game controls.

PACMAN Reloaded 1.2 adds the capability of controlling pacman via accelerometer.

As we saw a few reviews, it seems that some people are not happy with the current Arrow-based controls. As such, we have added the option to enable Accelerometer at the Configuration Screen. We would appreciate if you could try this other option and let us know if it works better.

Your feedback is very important to drive our activities for the next release!

This morning, PACMAN Reloaded has just toke the lead of sales overall in Brazil, South Africa and Costa Rica. Babs2Go team is extremely happy with these results and we are working hard to include on our software the most of the fix/enhancements that has been suggested by our PACMAN Community. We have been monitoring the reviews on the App Store and we are glad to say that, in record time, Apple has approved our latest version of PACMAN Reloaded. It is the first time ever that I see an App being approved in a matter of a few hours. Submitted this morning (11AM) and just got approved(5PM). It will be pushed to our installed base over the next 24 hours.

-Luciano
Posted by Luciano G. Fagundes at 5:07 PM No comments:

I'd like to announce our latest product on the App Store. Babs2Go is glad to bring to you PACMAN Reloaded. The greatest thing about this game is that it is already born with a few millions of fans :).


PACMAN is a classic arcade game that almost everyone who ever had a computer have already enjoyed. My daughter is about 5 years old and she just learned to play PACMAN herself. As she liked, she asked me to get PACMAN for my iPhone so she could play while we were driving her to school.


I have browsed a few options and didn't like any. As usual, if I do not like what is out there, I build my own. Ever since yesterday (Feb 12th)  the App has been available on the App Store. It seems that people are also liking it; with no marketing at all (even the Apple new release list has started showing it only today) it is already the 49 most sold App of the Entertainment category in Brazil.


I hope that you enjoy it!


If you have suggestions on what game to build next, let us know. My main source of information now is my daughter, but I'd love to bring to live your favorite game.


Here are a few screen from PACMAN Reloaded: 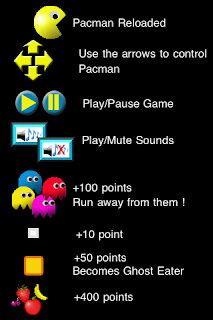 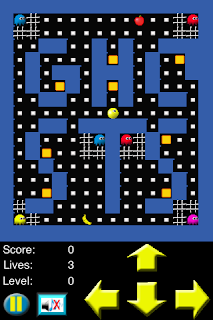 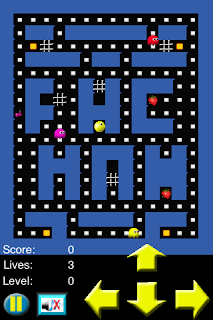 -Luciano
Posted by Luciano G. Fagundes at 8:49 AM No comments: